A spectacular blue sky framed by a snow-capped Pikes Peak greeted the 2014 Armed Forces Community Run held at 8 a.m. Saturday, May 10, at Peterson Air Force Base. The 5k / 10k run was open to the general public. [See photo gallery below.] 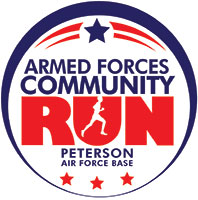 That factor alone made the event extremely appealing to runners in the Pikes Peak region, because Peterson AFB is normally closed to everyone except those with a military or DoD ID card. This rare occasion offered the opportunity to view what was referred to from 1943 to 1976 as Pete Field. In March of 1976, it was renamed Peterson Air Force Base.

Event attendance was an estimated 425 to include 263 registered runners at Peterson Air Force Base plus an additional 425 runners at deployed locations.

This year, the BolderBOULDER folks came on board to partner with our AFC event, allowing our runners to register onsite for the BB race on Memorial Day.

The BolderBOULDER, the largest 10k road race in the nation, was held on Memorial Day in Boulder, CO. The event clocked over 100,000 people, 52,000 of whom were registered runners, walkers, and joggers. Visit www.bolderboulder.com for details.

We look forward to partnering again with the BB for the 2015 Armed Forces Community Run.

The planets aligned perfectly to start the morning with the delicious coffee and tasty pastry bites from our sponsor, Serrano’s Coffee Company.

The High Frontier Honor Guard opened the official ceremonies with the playing of the national anthem, followed by a welcome from the 21st Space Wing Commander, Col Shaw.

Our local fire fighters made a start/finish line by crossing their tall vehicle ladders across the road. This was one of many creative elements unique to the AFC. You might say that running with giant cows (courtesy of our sponsor, Chick-fil-A) is also not routine to running events.

Another bonus was the recently added opportunity for runners to run over a mile of the route along the flight line that Peterson shares with the Colorado Springs Airport.

A fitting tribute to Mother’s Day, the following day, were the long-stemmed roses handed to the female runners as they crossed the finish line. It was a classy touch.

The mood was pure FUN, as the beat of Pharrell Williams’ “Happy” inspired some unique dance moves among the attendees and other-worldly creatures.

The Chick-fil-A bovine utterly hugged anyone within reaching distance, while stopping to do a jig with the wee ones. The smiles could not have been wider.

When he wasn’t doing pushups or sitting on the nearest lap, Sox the Fox sneaked up behind our 21st Mission Support Commander, Col Arnold, to tousle his hair, a move that only Sox could get away with.

Tucanos Brazilian Grill created their own party, serving a selection of cool, refreshing beverages and signature beef samples from their brilliantly-colored tent. The festive atmosphere was contagious.

Freedom Chiropractic welcomed tired runners to their therapeutic massage tables to work out the kinks earned along the route.

Our generous sponsors provided an abundance of product samples and giveaways. Attendees entered to win prizes by taking a passport card around to each sponsor to validate. After the Run and before the awards, winners were drawn and prizes were presented by our Wing Commander and our Command Chief, CMSgt Redmond.

Our thanks to Runners Roost, Boulder Running Company, and RunningGuru.com for their assistance with registrations.

A big thanks also goes to the amazing volunteers who hit the ground running to handle anything and everything that needed to be done.

Click here to see photos of the runners (photos by Jeff Kearney, courtesy of  The Gazette and OutThereColorado.com).

(See photo gallery below for sponsors and event festivities.)

We are grateful to these sponsors for their support of the Armed Forces Community Run.

(No federal endorsement of sponsors intended.)

When we reopen, we’ll be back with a fresh edition of the 21FSS Recreation and Leisure News, normally published in the Space Observer the last Thursday of every month.